This week, I continue my settings interview series — this time, speaking with Hydra partner Anthony Picaro about his Straits of Anián setting. Anthony is writing “A Coast of Grizzly Dreams,” reimagining Hydra’s first product, Slumbering Ursine Dunes, in a mythic Northern California of the 1800s.

HK: Please introduce yourself and give us the ‘elevator pitch’ (1-2 sentences) for your setting.

AP: Hi. Anthony, or Antion, whatever.
The tagline for Straits of Anián is: Old school roleplaying in the mythic Pacific Northwest. That’s the extent of it, really. The somewhat expanded version is more like…
In a mythologized Pacific Northwest of the early-to-mid 1800s,

I’m gonna call that 1 sentence because I am a villain.

HK: Either you are a villain or they have damn slow elevators in Seattle. Or both!

AP: I don’t ride many elevators, but I do find myself on the occasional ferry.

HK: What are some of the major sources of inspiration that you draw upon for your setting?

• Ethnography, folklore, and linguistics of Northwest Coast indians. A bibliography there would go on forever. There is also a fair bit from adjacent groups – Columbia Plateau, Californian, & interior Athapaskan indians and also Eskimo-Aleut & Chukotko-Kamchatkan peoples.
• History of the exploration of the Pacific Northwest – from Juan de Fuca & Francis Drake onward – and the subsequent fur trade era. The primary area of focus is from 1790-1850 or so, though.
• Cartographic myths of western North America and the fantasies behind them – La Isla California, Fusang as founded by Xú Fú and described by Huì Shēn, La Mer de l’Ouest, and the Strait of Anián itself to list the notable examples.
• Certain relevant acid westerns, revisionist westerns, colonial nightmares, & colonial farces – Dead Man, Ravenous, Black Robe, McCabe & Mrs. Miller, Aguirre the Wrath of God, The Drop Edge of Yonder, Blood Meridian, California Bloodstock, Little Big Man, etc.
• A general unease at the presence of the sea, reinforced by somewhat less good media like Leviathan, The Abyss, Dagon, etc. and also by a wide assortment of sealife documentaries.
• Just being a human about western Washington, hiking and canoeing and getting rained on & such. Also Cascadiana in general, with a focus on cryptozoology, pseudoscience, and various hoaxery.
• And of course the particular and peculiar mélange of fantasy media I’ve internalized ideas from over the years. Ursula K. Le Guin is prime here (also Alfred & Theodora Kroeber show up as ethnographers & folklorists above), but there are many others in print, audio-visual, and interactive media also. That list is more boring and full of familiar names though.

HK: What are some of the ways that your setting departs from ‘standard’ fantasy?

AP: It’s ~1834 (though heavily fictionalized) with all that implies. Players have access to rifled firearms & refined spirits. Andrew Jackson is president and he is sending spies to the Pacific Northwest and everything is terrible.

The cultures involved are not often explored, not only in ‘standard’ fantasy but even in fantasy that focuses on the so-called New World. By this I don’t mean solely the Northwest Coast natives, but also the multilingual, ethnically diverse Hudson’s Bay Company, with Orcadians & Métis & Hawaiians & others all forced to cooperate closely in pursuit of profit.

The geography defies exploration by traditional D&D overland crawling. The forest is dense, it blankets over mountains, nobody has any horses. Going anywhere overland is insane. Get a canoe, brave the sea in small craft. Still pondering ways to make that last more interesting, though.

HK: What made you decide to restrict land movement in such a way? Is that a function of hiking and other outdoors experiences that you’ve had? Or is there something else that drew you to that restriction?

AP: There are two very different answers to this question. Take whichever pleases:

1) It is simply a function of geography and history. Forests and mountains are barriers to travel; rivers and inlets are roadways. The Pacific Northwest was (and in some places still is) forested and ridged enough to render sea travel significantly faster and easier than land. And without the clear spaces brought by extensive deforestation, little use horses.

2) There are multiple worlds beyond existence, into which humans only occasionally penetrate and even then not for long. The nearest of these to our experience are the Forest, the Sea, and the Sky, but they are not our home. Humanity exclusively inhabits the liminal world woven between – the banks of rivers, the surface of the ocean, the shadow of the treeline, the shore drained by lowering tide, the clearing opened by recent burn. Anything so mundane as travel from place to place occurs only here. Beyond is the Wilderness, mythic and strange, and journeys within it are undertakings unto themselves, not taken lightly.

HK: How focused do you keep your setting premise? Do you exert effort to keep it close to your original concept, or let it shift focus?

I’d say almost all changes implemented since initial conception are additive. The focus is on the Pacific Northwest in general, and natives of the Northwest Coast in particular, with the fur trade era taken as the most dynamic & unstable to place the game. None of that has ever changed. But certainly other details accumulate over time as I learn more about the importing of Hawaiian labor, or trans-Bering iron trading, etc.

For things further afield, I actually have several release valves for off-target content implemented into the setting. As example, I often have ideas that I decide are “too Morrowind” (true grognards may read as “too Tékumel”) for the main Straits area. So I have 2 designated places in the wider setting designed to accept those ideas – Fusang is one, the other is extraplanar. That is perhaps my general practice there – place it far away, in another region if viable, on another plane if not.

HK: Is it important to you to distinguish your setting mechanically as well as conceptually? What role (if any) do you see rules changes and tweaks playing in helping make a campaign setting feel unique? 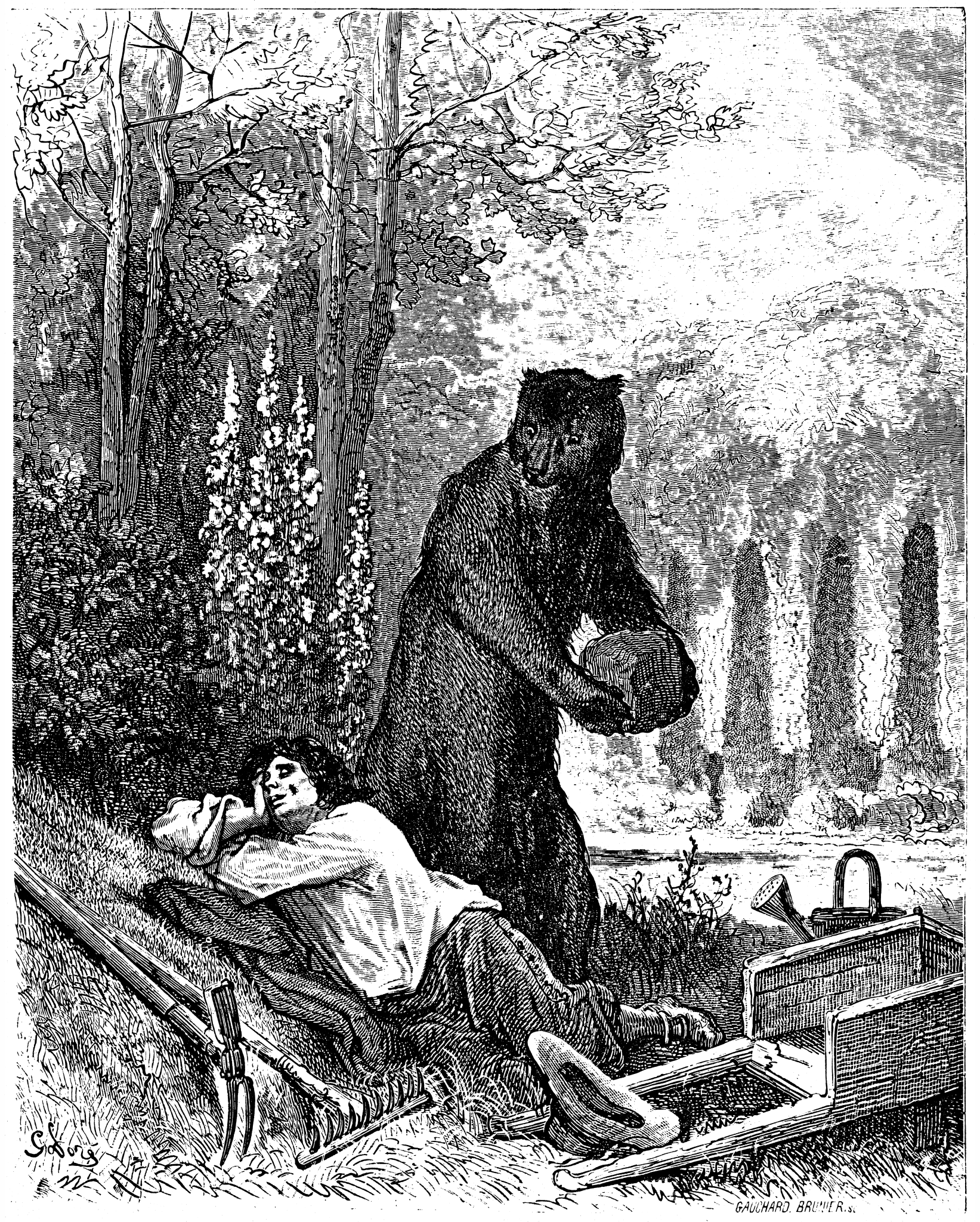 AP: I think mechanical tweaks are an effective shortcut to player buy-in. Membership in the Gravekeeper’s Society, dedication to the Owhyhee Church, possession by Untamed Winds, knowledge of hidden sorceries – all of these have mechanical effects but also carry a lot of setting weight. Knowing not to look in a sasquatch’s eyes, or how to properly kill a windigo so that it doesn’t rise again, or where a stone giant hides his heart – this is setting information, but it is also tangible data useful in a combat encounter.

So items, monsters, spells, & classes at least are easy to create as compact units of bundled mechanics & setting. They communicate these ideas more economically than infodump.

Similarly, subsystems & minigames reinforce themes. They tell players the things you are interested in about the setting, again in practical, gameable ways. (Note I am not saying that a game is only about the items that are mechanized – or the opposite statement, which I also see thrown about. Merely that the existence of mechanics signals to players directly that this is a topic you have thought about before and put effort into and that might be fruitful for them to explore.)

The ability to retain a bare-bones structure to which one can quickly attach & interchange different modules is to my mind among the primary virtues of the old school, and one I cultivate specifically. What I at home consider my “rules document” is 2 sheets of paper, 8½”×11″, printed front & back. The “character creation & player reference” adds 1 more sheet to that (and ⅔ of that is equipment). Everything else – spells, monsters, situational mechanics, &etc. – is additional, optional, and only on screen when it needs to be. The diversity of these elements never needs to be tackled as a whole. Players only need engage with the specific bits placed in front of them, and their rate of occurrence is entirely within the realm of GM control.

HK: One of the criticisms that gets leveled at in-depth settings is the buy-in required – the more you work to place a setting apart, the more a prospective player or GM has to do to understand the setting’s premise and mores. (Tekumel is the traditional example here.) How do you deal with the buy-in issue?

AP: I think it’s important to allow players to determine their own level of setting buy-in, and to have a game robust enough to support different levels of buy-in within the same party.

While Tékumel is the traditional example of the problem, I also think it already contains the traditional solution: Empire of the Petal Throne begins players as outsiders from a “(presumed) barbarian homeland” – individuals with in-game reason to know little about the environment they are entering. This approach also used to great effect in some CRPGs I enjoy – the Vault Dweller (Fallout 1) has lived her whole life isolated underground, the Nerevarine (TES 3: Morrowind) is from another province and spent the past years in prison, and the Nameless One (Planescape: Torment) is an amnesiac. None have any reason to know the setting, lessening the burden of setting knowledge on the player.

I prefer to keep the same option open to PCs. So despite that the setting itself uses largely non-European material for inspiration, players are assumed (though not required) to be outsiders. The Company (modeled on the Hudson’s Bay Company) is always importing workers, their contracts are always expiring, and people are always disappearing into the wilderness to seek their fortunes. This provides for a steady supply of setting-ignorant PCs, theoretically from anywhere European ships are visiting at the time. So players can pick something they know or care about – as long as it’s around in the first half of the 19th century, they can be that. All other buy-in can occur in-session. And if a player wants to dive in deeper at any point, I’m open to it.

As to prospective GMs, well I guess I don’t recommend you try to run a setting like that straight without sufficient buy-in. You do you. When I write stuff with the idea that other GMs might use it though, I do try to atomize as much as possible, to reduce everything to lift-able components.

“A Coast of Grizzly Dreams” is currently scheduled for a 2016 release.