Strange Stars Fate: An Interview with John Till

1. What appeals to you most about the Fate system? I love the Fate system because it is extremely light (just one roll to rule them all) and has wordplay-based mechanics – the aspects. Both of those things play to my strengths as a GM. I’m particularly good at running “on-the-fly” games. Figuring things out at the table during play, engaging the players in contributing to the details in a scene, keeping the action moving: all of that comes pretty easy to me, and the Fate mechanics support it.

2. What drew you to this project? I started reading From the Sorcerer’s Skull a few years ago. I am a big China Mieville fan, and was really pulled-in by your development of a D&D-informed pulp-supernatural version of New York City: Weird Adventures. But I’m actually more of an SF gamer than a fantasy gamer, so when I saw you taking the first steps to develop an SF space opera setting, I wanted in!
By the way, From the Sorcerer’s Skull and Jim Garrison’s Hereticwerks blogs were the two that inspired me to start the Fate SF blog! Although I am primarily a Fate GM, the kind of energy that OSR bloggers brought to world-building was really inspiring to me. I try to do similar things with Fate.

There’s one area where I am more similar to OSR folks than to some in the indie gaming scene. System matters sure, but I like open systems with a lot of flexibility, rather than deeply procedural approaches to mechanics. Fate offers that, and Fate Core and Fate Accelerated Edition really enable a faster, more free flowing style of play than some of Fate’s earlier implementations.

3. What was the biggest challenge? The biggest challenge was getting the clades right. As your regular readers will know, the heart of the Strange Stars setting is the clades – the biologically distinct branches off of standard homo sapiens that make up the species of the Strange Stars. Some clades are even aliens, and others are androids or even artificial intelligences! The setting has a lot of complexity in that respect, and the flavor created by all those subspecies is part of the magic behind the Strange Stars setting.
So getting the feel right for all these different clades using Fate mechanics such as aspects, skills, and stunts (i.e., each clade’s special abilities) that was a lot of work. The good news is that it works well at the table. Players look at the different clades in the Strange Stars game setting book, decide what they want to play, and then use the clade templates in the Strange Stars Fate Rule Book to build really unique, flavorful characters!

4. You’re well read in the sci-fi genre. Do you think that affects the way you approach sci-fi gaming as opposed to someone whose inspirations might come more from film or TV? Sure! For starters – and this game advice is in the “Adventure and Campaigns” chapter of the Strange Stars Fate Rule Book – whenever I introduce Strange Stars to a new group of players. I go around the table and ask them what kinds of science fiction they like. That gives me a good sense of what they know and what they might respond to well! If a player doesn’t know much more than Guardians of the Galaxy, that’s fine. I ran a Guardians of the Galaxy-inspired Strange Stars game at a local con back in the spring.

Last weekend, I debuted the newly released Strange Stars Fate Rule Book at U-Con in Michigan. I went around the table and asked the players to talk about the SF they like. One player was a young woman playing her second RPG session ever! She had almost no SF experience except a couple of TV shows, but she found an image in the Strange Stars setting book that immediately grabbed her. She created a Phantasist, one of the clade of dream chemists. Her character really blew up the spot at the end of the game, releasing an aerosolized nightmare drug right into the middle of a battle! Hands down the craziest range weapon one of my Strange Stars players have ever deployed!

Another player was an SF fan in his 70s – the kind of well-read older dude you’d meet at a local literary SF con. I wouldn’t be surprised if he was a retired mechanical engineer; we were that close to Detroit. He said that Poul Anderson was his favorite SF author. When he mentioned Ensign Flandry that really brought me back to those hot Michael Whelan covers of the 70s and 80s! He chose a Kosmonik, one of the weirder posthuman clades in Strange Stars! Their physical oddness, their cultural isolation, and the fact that they live in spaceborn communities makes them a classic SF trope; they remind me a lot of Alastair Reynolds’ Ultras from the Revelation Space series.

The Kosmoniks are a spaceborn species; so the older player chose to pilot the players’ ship. The Kosmoniks don’t speak; they use sign language with their own kind, and communication devices with more normal clades. The player was German, and announced with a strong German accent that “My communication device produces a mellifluous baritone.” You can’t make shit like that up! In fact, in Fate, those kind of descriptions are part of the character. “Mellifluous baritone” becomes a playable aspect!

5. With all the sci-fi games out there for Fate, what do you feel like Strange Stars Fate adds to the mix? Funny you should ask that! I posed the same question this weekend to one of the players in my U-Con game! His immediate response was “The weirdness! Every character is strange!” That’s not an accident! Every character creates a Strangeness aspect as part of character generation; that helps to pull out what is distinctive – and strange – about each character. This can be a trait, an experience, encounter, or event, or even an inexplicable alien artifact that happens to be in the character’s possession. It’s often the thing that set the PC on the adventuring path in the first place.

That strangeness is reinforced by the clade templates. There are 25 clade templates in the book, so players can build a very distinctive set of characters with unique aspects, areas of focus in terms of skills, and clade-specific stunts. Normally RPGs with that many races kind of exhaust me. But here it just reinforces the wildness of the setting. And there are lots of SF Easter eggs among the clades that SF fans will enjoy discovering.

And of course, the character generation mechanics also allow you to create your own clades as well as interesting “true human”-type characters with distinctive, specialized abilities.

Another area where this implementation of Fate differs from some other recent games is that we pull from earlier Fate designs, particularly the superb SF game Diaspora. We have adapted the system generation rules from Diaspora SRD for the Strange Stars setting, so that the players (or the GM) can generate a world or a cluster of hyperspace-linked worlds with ratings for the system’s tech level, environmental characteristics, and resources. Frankly, I am surprised that other Fate Core games haven’t adopted these simple and fun mechanics! They are really one of the best things ever created for Fate!

Finally, I am really happy with the Factions rules we’re created for Strange Stars Fate. Factions are higher-level characters representing everything from star-spanning organizations to local pirate fleets. Players can invoke their own aspects to get factions involved in the action (leveraging special resources, eliciting game-changing responses to player provocations, bringing factions onto the scene when they weren’t involved before, etc.).

The Factions rules, which are based on Fate Accelerated, can also be used at the start of a campaign or really at any point during a campaign to map out what’s happening as a result of a Big Conflict, such as an invasion of a system, a colonization effort, complex trade negotiations, or a power struggle between different political factions inside a system. It’s a way of running a simulation of “what might happen” when various factions (each played by someone at the table) come into conflict. Factional play sets the stage for roleplaying informed by a set of situational aspects derived from the conflict.

I just adapted these Factions rules for a Tekumel scenario at U-Con; the players were blown away by it. They asked for a whole factional play game session next year, followed by a roleplaying session based on the results of factional play.

I the system creation and factions rules are really sub-games that can be used with any RPG, not just Fate campaigns. All you need are four Fate die, or two D6s of different colors (roll 1d6-1d6, and treat +5s and -5’s as +4s and -4s, respectively). Anyone who played Traveller back in the day can appreciate the value of these kind of subgames. 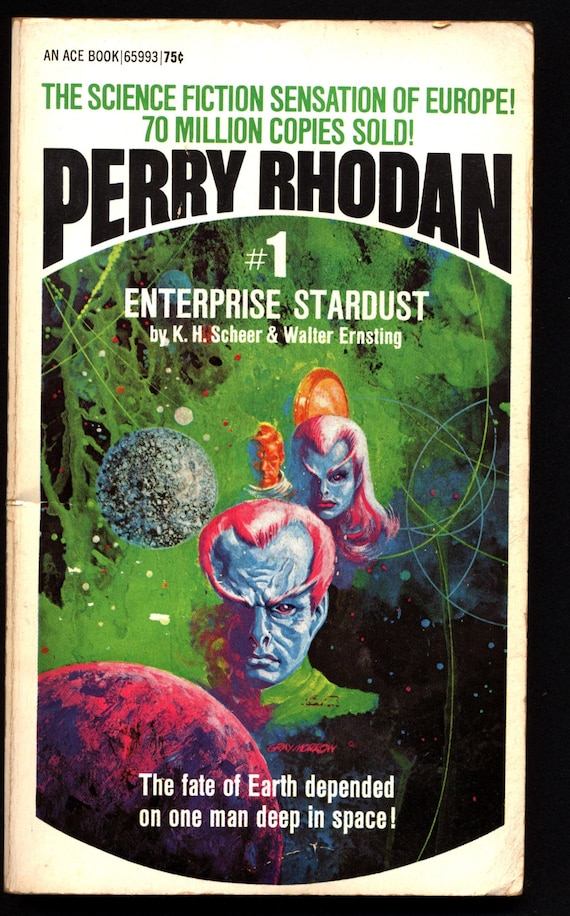 5. You write a blog with SF in the title! What are some works/authors that you like? I read a lot of SF on my own, and I am also part of the Second Foundation, a SF reading group in the Twin Cities that has been meeting for decades! This is an SF-rich community, with two world-class SF book stores just a few miles from my house. We read a lot in Minnesota, because of the long winters.

As a kid, my first SF books were:

My big SF influences these days include Alastair Reynolds, the Culture novels of Iain M. Banks, and the classic space opera of Cordwainer Smith. And of course, Eleanor Arnason, Minnesota’s best SF writer. Space opera fans should make a point of reading her Ring of Swords; fans of Niven’s Known Space stories should read her Tomb of the Fathers. I read ALL of Cordwainer Smith’s Instrumentality short stories and Norstrilia last year. I (re)read six Delaney novels over the summer!

Like I said, we read a lot in Minnesota.