There are a set of underlying premises to the Strange Stars setting which might affect the play of the game. My assumptions don’t have hold true in your version of Strange Stars, but it is probably helpful to consider how the pieces might interact before rejecting things.

Post-Apocalyptic. The technology level of civilization in the past was higher than today. This provides the rationale for some “sufficiently advanced” Clark-level technology, the “points of light” nature of civilization, and also for lost world exploration and space scavenging.

Big But Bounded, and Subdivided. Strange Stars exists within one galaxy–and only a relatively small part of that one, but still there’s plenty of room for new clades, cultures, even minor empires to be introduced without much disruption. The use of hyperspace means that there are “clusters” that can serve as smaller sandboxes if the whole area is too daunting. The game can be as focused as a single world or station.

Harder than Average. While Strange Stars is in no sense a “hard science fiction setting,” there are a number of details I tried to keep “semi-hard” and realistic. Earthlike worlds are most often the result of engineering and there are seldom multiple earth-like planets in a system. Most people will live in orbital habitats. FTL exists but works in such a way that it couldn’t violate causality. There are very few “single biome” planets, and those there are tend to have an explanation for why they exist. The aliens aren’t very alien, but that’s because they’re most likely the descendants of humans or human creations. 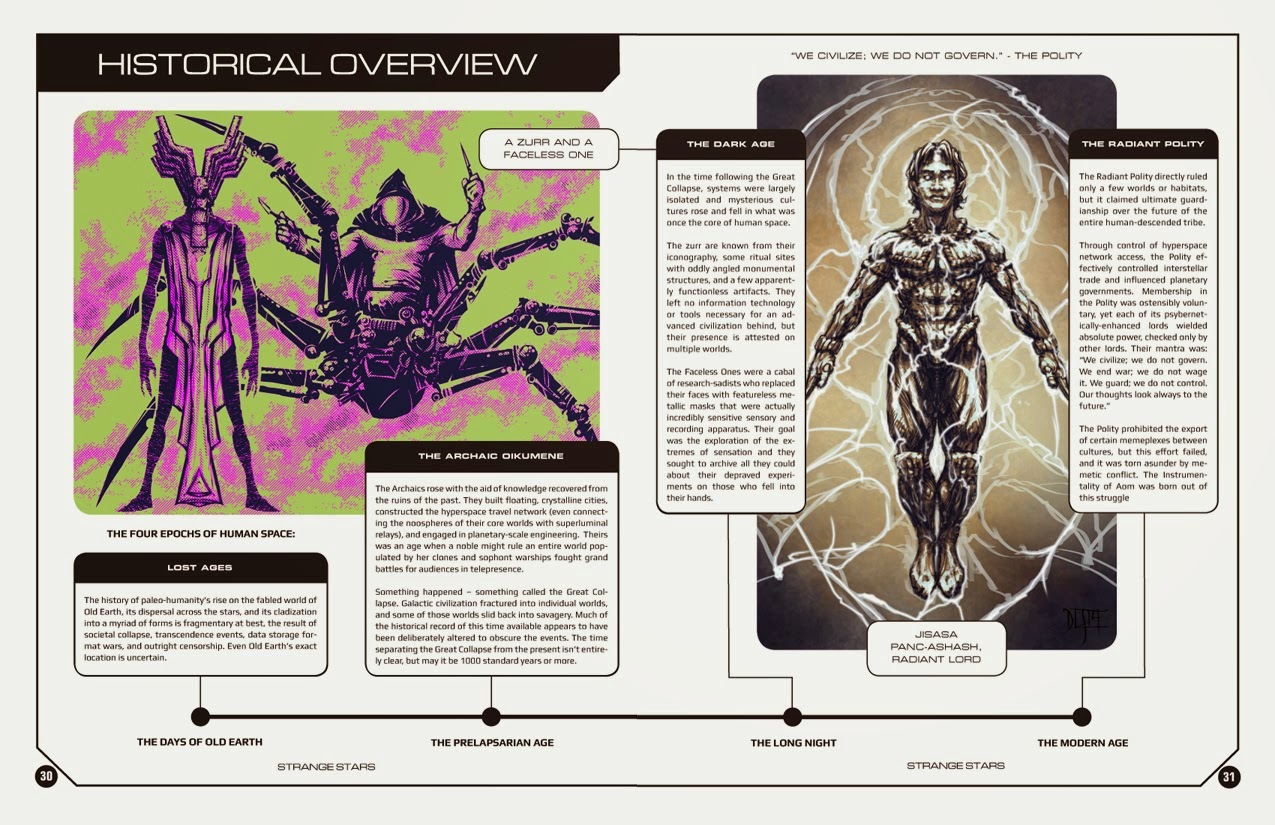 Intersystem, Fast. Intrasystem, Slow. Related to the last point is the way FTL works. Hyperspace nodes tend to go to one place in a system (and may well dump out somewhere other than directly at the planet of interest). In system travel is most likely non-FTL and takes a while. This allows both zipping around the galaxy (at least a part of it) and “realistic” distribution of clades, but with a hard science fiction scale to a solar system, allowing the full array of grizzled asteroid prospectors, fringe religious communities on gas giant moons, or isolated research bases. The planets highlighted in the setting book are just the “major feature” of their respective systems, not the whole story. Of course, the way space travel works also has implications for how and where space battles are fought.

A Post-Internet Conception. Most classic space opera doesn’t take into account the internet in general, much less ubiquitous social media, but these things are present in Strange Stars. As a rule of thumb, imagining “how would that work in the Strange Stars?” involves more extrapolation from the present that looking back to how it was done in Star Wars or Star Trek.

There’s Always Belief. The future doesn’t mean belief systems go away. The best of space opera (Dune, for instance) deals with this, but it was something I didn’t want to leave out or to portray one-dimensionally. From the arbitrary taboos of the Kosmoniks to the realpolitik theocracy of the Instrumentality, it’s an important part of what makes cultures in the setting distinct.